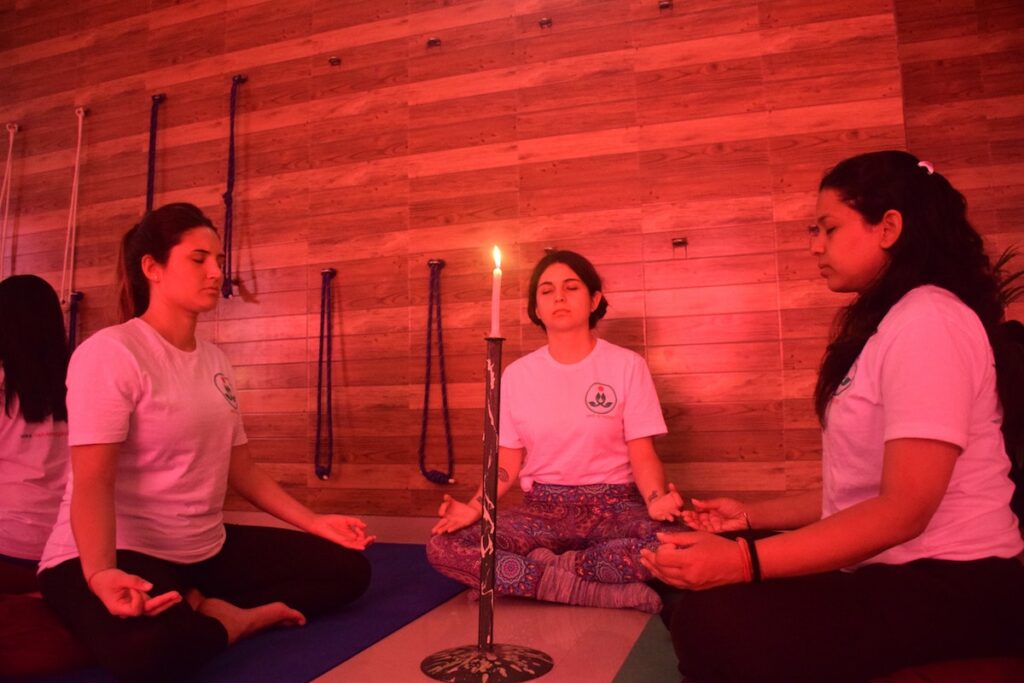 How To Do Candle Flame Trataka and Its Benefits

On following the 8 limbs of yoga, it merges us with the supreme-soul through ‘Samadhi’. But before you attain the samadhi, you must mastery over Dharna (Concentration).

In different classical text, there are a number of techniques described which helps in developing the sense of ‘Concentration (Dharna).’ Trataka is one such technique which concentrates the mind by stilling the movement of eyes.

The term ‘Trataka’ or ‘Tratak’ has been taken from yogic language (Sanskrit) which means ‘To look’ or ‘To gaze’. The gaze in Tratak is focused at some pointed object which can absorb the eyes efficiently (In turn, focuses the mind).

Initially, the object can be a source of light (candle flame), a black dot on a white wall or an image of self on a mirror. With time, the practice of visualizing the after-image of an ‘external object’ gets intense.

The focus of an ‘external object’ can be shift internally on ‘mind screen’ easily. Hence, one can say, Tratak is a technique that lets us look mind (& so on, the soul) through eyes.

An intent and relaxed gazing of eyes on an object don’t let wander mind in Trataka. Thus, Trataka in hatha yoga is practiced as a frontal mind purification technique & is a part of shatkarmas.

In the language of spirituality, an opening of the third eye is considered a doorway to higher consciousness & enlightenment.

How do Trataka works

Our minds & eyes are inter-related to each other. As in our body, there are five sense organs- eyes, ears, nose, skin & tongue. From these, we can smell, sound, touch, sight or feel anything. Among them, all, visual (sight) is the most powerful.

In the case of touch & smell, we have to be near the objects so that we can touch or smell it. However, our eyes can observe the objects or the landscapes that are far away without contact that object.

In our body, the eyes contain more than 200 million working parts after the brain. The retina and the optic nerve of our eyes develop a direct outgrowth of our brain.

The retina & the brain have similar structures, though it says as the retina is a type of brain that grows in the eyes. It is said that our visions are directly connected to our minds. Our mental states can affect our eye movements.

Our brain can also be managed or affected by doing some eye practices. That’s the thing which helps people who has good intelligence to judge the mental state of other people through their eyes.

Trataka practice is not only the way to attain stillness of mind, but it’s very powerful & quicker in the feedback also. While practicing Trataka, we focused our attention at the objects or the candle flame through our eyes concentration. This helps us in releasing disorders related to the eyes & the brain.

There are 3 (three) types of Trataka. They are-

Antar Trataka is the technique, performed through closed eyes. In this, we have to close our eyes and then focusing on any symbol or point. If we don’t have any symbol or point in mind then we can focus our attention on the middle of our forehead.

While practicing Antar Trataka, it may feel some pain or heat in our mind in the beginning. But we don’t have to worry about it, as it will normalize gradually. Keep trying to focus on that point.

Madhya Trataka is the technique, performed through open eyes. In this, we have to focus our attention on near objects of any material.

We can also practice Madhya Trataka with the candle flame, concentric circles having dots in its middle, black dot in the white wall or vice-versa. We should close our eyes if we feel burning sensation in our eyes & then can start this process (Kriya) again.

Keep the object at a distance of 20 to 25 inches at eye level so that there is no pressure or rinsing on our neck. This Trataka should be performed in a dark room that is free from insects and the flow of air.

Bahya Trataka is the technique, which can be performed at any time of the day or night. In this, we have to focus our eyes and attention on any distant object like the sun, the moon & the stars.

The people who are having their eyesight week cannot practice Bahya Trataka. As it may cause them mental disorders.

How to do Trataka

Trataka can be practiced in various ways by focusing our attention on a dot on a leaf, candle flame, darkness, blue sky, photograph, crystal, flower & needle. Trataka on the candle flame is the most effective & popular Trataka.

How to do Trataka on the Candle Flame:

Or we can practice the same process with the other objects that are mentioned above.

Strengthens our eye muscles: As the blinking of an eye is in our control while we focus our attention at the small objects of any material. It helps us in strengthening our eye muscles.

Purifies our eyes: As we exercise it to focus upon a point which helps in improving the internal functions of an eye. This helps in purifying our eyes.

Treats our eye disorders: When we gaze at an object such as the candle flame or any other small object. This improves our eye concentration that helps in treating eye disorders.

Relieves insomnia: As practicing Trataka gives us peace by taking away negative thoughts & desires from our minds. This helps us in relieving insomnia.

Calms our anxious mind: As Trataka practice helps us in disconnecting with the noise & distraction from the external world. This is really deep relaxing or calming your anxious mind.

Boosts our willpower: When we’ll have the spiritual & mental powers by practicing Trataka. Then we can also boost our willpower.

Improves our vision & memory: It is said that 50% of our minds keep engaging on ‘what we see’. Trataka is totally based on vision as it is practiced by visualizing the small objects of any material.