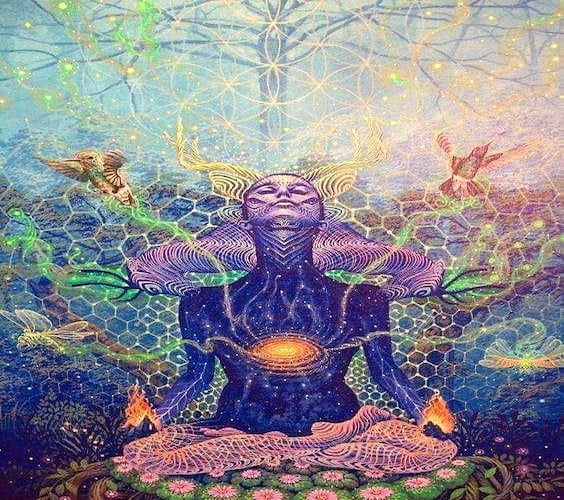 The three coils of kundalini indicate three Gunas that are Rajas, Sattva, and Tamas. The half coil represents transcendence.

It stays with us until we die and then it gets back to its source, which is the supreme soul.

With the help of yoga and spiritual practices, one can set the life force or the pranic energy free. When this energy is freed the life force arises from the base of the spine through all the energy points (7 chakras) and results in an ultimate state of consciousness. This whole process is called Kundalini Awakening.

What is Kundalini Awakening in Simple Words

According to Satguru, kundalini awakening is like lighting a bulb. He says, Muladhara chakra is a plug point and Sahasrar chakra is the light bulb. Rest other chakras are plugs that we have to plug into the plug point, to lighten the bulb. We need to be steady and calm to plug-in into the plug point. Yoga is the science that will make us able to plug-in to this uninterrupted source of power.

In conclusion, Kundalini awakening is an act to flow the pranic energy from the Muladhara chakra to Sahasrara chakra, through the help of the other five chakras.

What Do Kundalini Awakening Results

Kundalini awakening brings a lot of changes in our body. The change starts from the base of our spine. Ones the kundalini starts to rise from the base of the spine, it purifies the mind soul and the body. It generates awareness and a sense of consciousness from within.

It makes us calm and cool in every situation. It generates certain psychic powers within us that increase our will power and mind power. This awakening makes us more creative and stronger.

Kundalini is a divine form of energy. We gain an attitude of accepting every aspect of life, whether positive or negative. We make wise choices and we understand things in a better way.

The main motive to do kundalini awakening is self-realization, to know what we are and what we are capable of, how many powers do we have and how we are using them.

The Science Behind Kundalini Awakening

While meditation, we feel some powers. These powers are some electromagnetic wave, we call them an aura. These are spiritual and cosmic powers that we feel during any spiritual practice. Due to certain spiritual practices, this energy/ aura creates some vibrations at the base of the spine where kundalini exists. This leads to the awakening of Kundalini.

The process of awakening the Kundalini is in 4 stages. The stages are

Awakening stage (Arambha): In the first stage the Brahma knot is opened. This knot is the seal in base chakra that is very close to kundalini, therefore, it is important to open Brahma knot to open the kundalini and set it free.

Absorption stage (Pacihaya): This is the stage when the cleansing is done. In this stage, the body absorbs the energies of kundalini and removes the negativity.

Attaining these stages is not that easy as it seems. You will not gain the self-awareness that easily. You might face many distractions and problems in this whole journey. It will take time to do this whole process.

A Conversation on Meditation