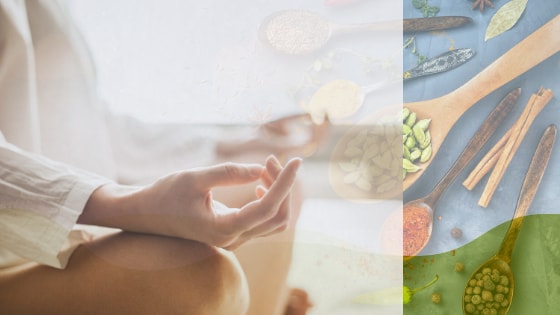 Ayurveda and Yoga: Two Paths of Merging Body and Mind

Body & Mind are two faculties in a human being that commonly aren’t aware of its own existence & always keep involved in mundane world things. Yoga originated in ancient India to get control over the wandering mind, but at the same time, controlling the mind isn’t easy if your body isn’t well. So, to know the body in a better way, there is the science of Ayurveda.

Ayurveda and Yoga: 2 Sides of A Coin

Ayurveda is among the four Upavedas that tells all the characters of a healthy body and mind. Yoga is one of the six schools of Vedic philosophy. In some manner, yoga is the practical representation of principles of all these six and tells the methods of formation of a meditative and spiritual body.

What is The Purpose of Ayurvedic and Yogic Practices?

In the classic Vedic knowledge, Ayurveda was formed especially for healing purposes. There is no other system except Ayurved that tells about the healing of the body. It was formed before Yoga.

Since Ayurveda includes only the healing practices of physical sufferings, therefore Yoga was formed to heal the spiritual and mental sufferings, Kleshas.

Primarily, Yoga does not target on healing the physical body. Yoga mainly targets spiritual progress, healing all the mental problems. Yoga mainly takes us on the spiritual path and all the healing effects are like complementary things we get on this path.

Both Yoga and Ayurveda, are based on the principles of Trigunas (sattva, tamas, and rajas), Tridoshas (Pitta, Kapha, and Vatta) and Panchmahabhutas (fire, air, earth, ether, and water)

We can understand the meaning of Yoga with a simple verse of Patanjali Yoga Sutras, which is “yogas-chitta-vritti-nirodhaha”. It means, yoga heals all the suffering of our soul or spirit. This verse clears the aim of Yoga, which is ‘to heal a body from inside’ or ‘to remove all types of sufferings at the mental and spiritual level’. Yoga does so by settling the mind and unites us with our inner self.

The verse in Ayurveda “svasmin-dishati-iti-svasthah” which means ‘one who is united to its inner self is healthy’ states that the aim of Ayurveda is also uniting us with our inner self.

Both Ayurveda and Yoga have the same aim to heal the body and to make you healthy. One does it at the spiritual level and one at the physical level.

Yoga and Ayurveda Together: The Unity of Body, Mind, and Soul

For a healthy body, the union of body, mind, and soul is required. This process starts with healing the physical body. Ayurveda stimulates the physical body and starts the process of healing.

Thus Ayurveda and Yoga together unites the body, mind, and soul.

Both are an inseparable part of each other and complete each other.

Ayurveda is a part of yoga. Without Ayurveda, Yoga is nothing more than just a physical exercise, nothing else. Yoga cleans all the channels (nadis) of the body with different asanas and pranayama, but it is impossible to do it without the principles of Ayurveda.

Thus, Ayurveda and Yoga complement each other. One who wants to stay healthy and who is trying to unite the mind, body, and soul, have to combine Yoga and Ayurveda together.