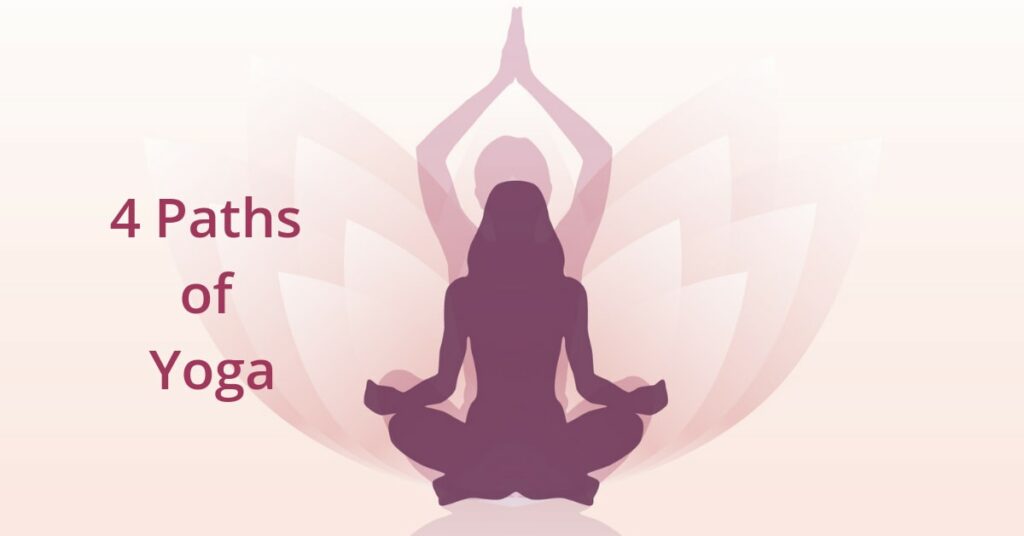 We as humans carry a uniquely identifiable set of qualities and paths that defines each one of us differently. Many of us must be the ones who once stepped into a Yoga class and never could do it again wondering, Nah it is not for us. It is because of the resonance of Yoga with at different levels.

There are certainly different levels that people get inclined to Yoga. Though, the destination of all is the same, ultimate peace and happiness. This is why Patanjali derived The Four Paths of Yoga for further enlightenment of people.

As per ancient studies conducted by Yogis and intellects, forgetfulness and separateness with self are the leading causes of suffering. This is known as Avidya which arises due to three main impurities of the mind, Vedanta says. These impurities are:

Avavana –Which refers to forgetfulness or not having knowledge of True Self that separates us from life itself as an individual.

Mala – Selfishness, working only for the benefit of oneself, to fulfil their needs.

Vikshepa – it is the trait of a mind to be like fickle-minded or the mind that shifts from one thought to another.

So in order to overcome these shortcomings in our lives, School of Hindu Philosophy, Vedanta also came up with the Four Paths of Yoga. The philosophy worked on the first cause of not knowing to correct which, the rest of the impurities will stop worrying us.

The Four Paths of Yoga Explained:

Bhakti is a Sanskrit word which means Blissful, Selfless, and overwhelming Love of God. It signifies selfless love and devotion which is based on the belief ‘Love is God and, God is Love’.

Bhakti doesn’t just refer to love relationships between Gods or Goddesses or devotee and the Divine, but can also be referred to the bonds between family and friends.

Bhakti has originated from the word ‘Bhaj’ which delivers a meaning ‘to participate’ hence the devotee’s surrender and worship, and even sacrifice to the divine. The goal of Bhakti Yoga is to become one with the divine which can be achieved through regular practice.

Bhakti Yoga can help remove jealousy, anger, and feelings of hatred towards others and replaces them with joy, love, ecstasy, and wisdom. Moreover, the divine could be the guru, a family member, or friend or vice-versa.

Bhakti is the first of the Four Paths of Yoga that can be practised by anyone and is said to be the easiest one since it does not involve any tedious or strenuous practices. Bhakti is the only link between a pure heart and the Divine.

One who reaches this purest level of love feels love deeply, has purest thoughts, speech, and actions for others. He always looks for the divine image in everything. He stays apart from egoism, and hatred for others but serves everyone with the same purity.

Karma defines the action, during practising Karma Yoga, one has to remain detached from the outcome hence, devoting himself solely into the moment his actions are taking place.

Karma Yoga teaches us to practice without expecting a result walking the path of selfless service. One way to achieve it is to keep up with humility and keep working as a servant to the divine.

This selfless process helps purify the mind and encourages oneself to practice more for the good of others. This must be kept in mind that expecting or asking for return favour is counted as a selfish act.

Those who practice Karma, are free from egoism, hatred, jealousy, and selfishness. They grow more humble, gentle, and empathetic with patience.

Karma Yoga is the process of achieving the utmost level of satisfaction and perfection through action. Principle of Karma is to keep doing whatever may be the results without any expectations and recognition.

Jnana Yoga is considered the most difficult path the intellect comes to realize that they are one with the divine once they go beyond their own limits. It is the path of wisdom and knowledge that ultimately leads to enlightenment of self and others.

Gyana Yoga empowers us to differentiate between the real and the unreal ones and helps us get to the level of self-realization. Through the path of Gyana Yoga, the questions we pose are reflected upon us to be answered by nobody but ourselves.

This third Path out of 4 Paths of Yoga is one such path that helps us connect with inner-ourselves and assess out will power, patience, and resilience. Once an intellect realizes of himself, he no longer remains fettered with ego, selfishness, and entrapment, and delusions of being superior.

The final Path of the Four Yoga Margs is Raja Yoga which refers to Royal Path. Raja Yoga mainly focuses on chanting of Mantras, Meditation Techniques, and Breathing Techniques.

This Royal Path helps us to overcome pitfalls and downsides in our minds with the help of Meditation and Chanting. All the turbulence caused by different situations we come across daily can be balanced up by Raja Yoga.

Raja Yoga can be practised by anybody to bring mind, body, and soul in harmony. It can be easily performed since no certain belief or faith needs to be practised prior. This Path helps vanish the mist of disturbing and deteriorating thoughts that affect your vast kingdom of mind.

To achieve a pure state of bliss and divinity, this path is followed that results in illustrious willpower and shiny soul. This is the most practised path in western culture as it results in a balanced sleep, lifestyle, and work without any faiths to being followed.

Mind, Body, and soul are in harmonic rhythm with nature and the regular practitioner develops conscience to take better decisions and feels stress-free of every pressurizing situations.

We must choose a path for ourselves to first know who we are, what we can achieve with what we have and how we can overcome the stress, win over the negativity, and be better of who seem to struggle today. If one is still standing on the four-way wondering which way to choose, these Four Paths of Yoga are always opened wide.

At Rishikesh Yogis, we believe yoga is a life-style. It is not a technique or a mere practice; it is how one can lead their life towards its betterment. Our yoga retreats and training sessions lead you to immerse yourself into the yogic lifestyle while dwelling in an ashram style setting, alongside experienced and dedicated yogis. Our yoga teachers are world-class yoga certified trainers, while our courses are certified from the very prestigious Yoga Alliance, USA.

Why Should You Take 200 Hour of Yoga Teacher Training?