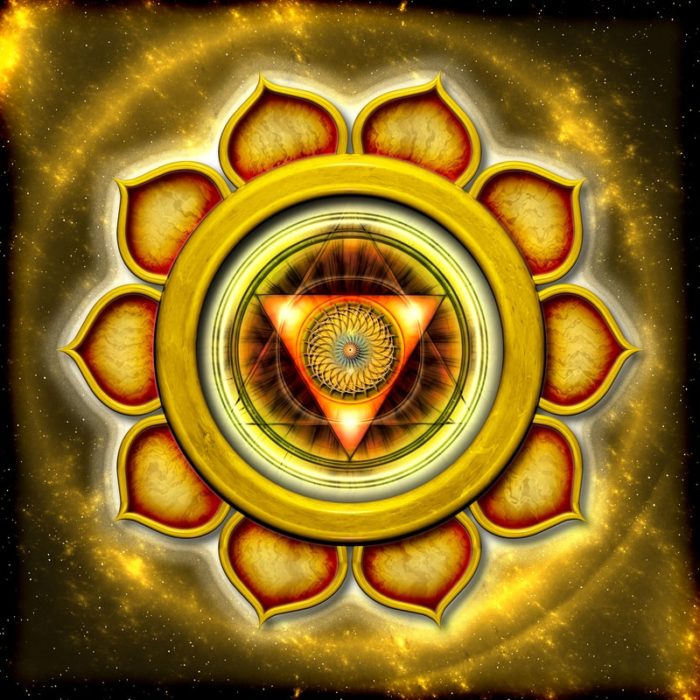 The Solar Plexus is an assortment of two bales of nerves or ganglion that are inter-twined, and pass each other at the mid portion inside the abdomen. The Solar Plexus is situated at the center of torso, above the navel. It is a central location of nerves in the stomach area.

The Solar Plexus also known more traditionally as ‘Coeliac (belly) Plexus’, got it’s new name due to its resemblance to the sun. It’s nerves assemble at the center, creating rays of nerves shining outward towards other parts of the body.

Solar Plexus is also known as ‘Manipura’ in Sanskrit, whose third chakra energy gets mobilized when a person asserts himself or herself upon this world.

Where is your solar plexus located?

Solar Plexus is also known as celiac plexus, is a complex network of nerves located in the abdomen, where celiac stem, superior mesenteric artery, & renal arteries branch out of the abdominal aorta.

It is at located at the back of stomach and the omental bursa, & in front of crura of diaphragm, at the level of first lumbar vertebra. It’s energy propels you to move forward in life, towards fulfilling your dreams and aims.

According to Hindu manuscripts, the location of Solar Plexus is your third Chakra which is located just below the sternum (where your ribs connect to the front). You can imagine it as a beacon of light, which radiates from the center of your body.

The Solar Plexus or ‘Manipura’ is located in the upper portion of stomach, placed near your diaphragm. According to traditional structural counting of 7 chakras starting from lowest, this chakra is located on the third position.

It is yellow in colour which changes to golden with higher & improved frequencies. It is symbolised with a circle having 10 petals with a downward-pointing triangle inscribed in it. It’s natural element is fire.

The psychology and behaviour related functions of Solar Plexus are-

The prime function of Solar Plexus chakra is to give momentum to a person & make him move ahead in life fulfill one’s intentions & desires. It makes a person take a certain direction & act accordingly to reach goals.

Signs that tell that your Solar Plexus is out of balance

It becomes easier to make balance amidst your personal power and pleasant relations with others if your Solar Plexus is balanced. Contrary to that, an imbalanced Solar Plexus will undermine your self-image & social life.

An imbalanced Solar Plexus (third chakra) will result in-

How to tell that your Solar Plexus is blocked?

People getting criticised and rejected while at work or play results in their Solar Plexus getting blocked. Let me describe this further in detail-

People having weak Solar Plexus chakra always think & see themselves as victims who suffer at the hands of others. May it be their friends, colleagues, bosses or even relatives. Such people always think of themselves as helpless and lowly.

They walk gloomily with their head and shoulders hung down, due to receiving poor treatment, having lower expectations & aspirations. They remain & act shyly, and hardly take up any leadership roles. But they act cynically to put others down & show them in bad light.

Continuous absence of self-confidence & self-respect wears away their resolution to try and do any meaningful thing/s in life. Due to this, they start settling for a dull and frustrating life & other experiences. This is a symptom of weakened or blocked Solar Plexus.

People with lower or blocked Solar Plexus also start feeling inadequate and try to overcompensate other dramatically even for small things. This fake show of bravery & self-promotion is seen as arrogance by others, and crashes out easily.

This may further lead to less-confidence, loneliness, severe depression, feeling of friendlessness, and more over-compensating behaviour. A closed Solar Plexus chakra can itself lead to psychological problems for a person.

People having a healthy Solar Plexus do not brag about their achievements. Instead, they let their action and result speak for them. They are confident and kind, yet determined and calm; and are liked by one and all.

Due to it’s location at the center of the body, digestive problems like in-digestion, gas, diabetes, nausea, ulcers, celiac’s disease and liver problems happen due to Solar Plexus chakra getting blocked. So it should be taken care of.

When Solar Plexus get blocked, there might be additional energy present in it, which may lead to over-eating & over-indulgence in food and drinks by a person. Such a person also becomes lazy & intolerant.

On the other hand, shortage of energy in Solar Plexus may result in reduced body weight and loss of focus. A person with blocked Solar Plexus will struggle to know himself & what he really wants to have or do.

A blocked or ‘out of balance’ Solar Plexus chakra makes a person unable to define his or her aim and direction. As a result, s/he starts postponing major decisions of life, especially those related to self & one’s own family.

How to open/unblock & balance your Solar Plexus Chakra

There are certain advantages to focus on Solar Plexus chakra as it helps you create a positive self-image, take responsibility-based decisions, & understand and act accordingly as to what you want in life.

It also helps you to find & make good relationships, get better job-satisfaction, broaden up your social life, and boost confidence. It will also enable your spiritual growth, improve digestion & bring your focus on ‘purpose of life’.

In one line- “It will ensure that your use your time constructively to create a better & prosperous future.” Now let’s discuss four different points that will help to unblock & open your Solar Plexus chakra-

You will be surprised to know that there are various stones that are used for chakra-healing. They are being used since ancient times for various purposes. Different stones are allocated for each chakra.

Some of the most frequently used stones for Solar Plexus are:

Just like the kind of food you take & the diet you follow, impacts your health; similarly they also impact the 7 major chakras of your body. The best way to improve your chakras is by making small changes to your diet for different chakras.

Here we will discuss some specific chakra foods that will open-up 7 balance your Solar Plexus chakra:

Though meditation is used to improve focus and calm down one’s mind, it is also used to balance Solar Plexus chakra. It is considered as one of the easier ways for beginners to unblock their solar plexus.

This can be done by doing deep breathing for several minutes. Once you are relaxed & focused, you can move to visualization stage to access the solar plexus chakra. Following are the steps for deep breathing:-

You can also do some yoga poses every day after doing this kind of meditation to realign and unblock your solar plexus. Some of the yoga poses used to open solar plexus chakra are- plank pose, mountain pose, bow pose, child pose, warrior pose 1 and boat pose.

Most of these assertions are done to help boost your self-esteem. Going by that, doing any self-proclamation will help reduce blockage of your solar plexus. These will also help tackle your low-confidence & lack of purpose.

While speaking out self-assertions, put your hand on the body over your solar plexus area to feel them all.

In all, focusing on your solar plexus, understanding it’s functions & acting accordingly will improve your body’s overall functionality. Working on it to unblock and/or open it will improve your physical and mental abilities & make you feel more efficient and well-balanced.

It will also improve your decision-taking ability and taking up challenging tasks and responsibilities. Not just that, it will also help in developing your leadership qualities & make you an inspirational person for others.

In one line, it will evolve you and make you a better variant of self.

A Conversation on Meditation